Mrs. Smith and I don’t often get back to our former stomping grounds in Iowa’s capital city, but we’ll be there Saturday, June 8. It’s a multi-purpose trip, including a “Meet the Author” event the nice folks at Beaverdale Books so generously arranged on rather short notice.

If you’ve read some previous posts (like this one), you already know that both my fictional detective, Edward “Red” Shaw, and I are from Des Moines. Some of the action in North of Grand even takes place in Beaverdale at a taproom/bike shop I made up out of thin air.

Really looking forward to this trip. Join us at 1 p.m. Saturday, June 8, at Beaverdale Books if you’re in the area: 2629 Beaver Avenue.

Excerpted from North of Grand: Detective Red Shaw Novel #2
Read the book on Kindle or Nook

Shaw tried to remember the last time he’d been on a date. Way back, right after he met Sally. He hoped this one wouldn’t be as awkward. They’d arranged to meet at the west end of a pedestrian bridge over the river, just a short walk from the police station. He could see her approach from a distance, sporting a close-fitting white top and shorts. She was dressed for the heat and hard to miss. Her light brown curls were tied back and topped with a Cubs visor. A Cubs-blue bag hung from her shoulder.

“Hi, Red,” she said as she gave his hand a little squeeze. “Are you ready for some baseball?”

“You bet” was the best he could do. If her V-neck were any deeper, he wouldn’t have been able to speak at all. He took in her smile, her green eyes, and tried to relax. He tried to ignore the sweat trickling down his back and wished he hadn’t worn blue jeans. They followed the walkway south along the river.

“I played here once,” Shaw said as they approached the stadium.

“Well, not here, exactly, but in the old stadium. Same spot. This is nicer.”

They stopped to buy tickets. Not many seats were left for a hot summer night and they small-talked as the line crept along.

END_OF_DOCUMENT_TOKEN_TO_BE_REPLACED

No one has asked me yet, but I have the answer.

The question has to do with the title of my new Detective Red Shaw novel: North of Grand.

Why that? I’m glad you asked.

Much of Des Moines, Iowa, is north of Grand Avenue. It cuts through the city east to west – or west to east, depending on your point of view.

I was born there, grew up there, and lived there for a long time. I worked there. Mrs. Smith and I bought our first house there, a block north of I-235 in a neighborhood known as North of Grand. We lived there when our son was born.

South of Grand was another world. It’s where my mother took me and my five siblings on occasion to marvel and gawk at big, beautiful, expensive homes when we were kids. They were especially awe-inspiring when lit up for the holidays. She took us to a different neighborhood on the southeast side sometimes, too, to see how the truly poor people lived.

We were somewhere between rich and poor, a family of seven in a three-bedroom home on Merle Hay Road. (Why seven? One divorced woman plus six kids. She slept on the sofa.)

In high school I worked at a pharmacy just a block north of Grand Avenue, delivering prescription drugs to old folks, driving a car with a manual transmission that I learned to operate in a panic on my very first day on the job.

The same little store housed the best soda fountain around, with real ice cream made right in the store. I served malts and shakes and cherry cokes and lime phosphates and great sandwiches and other treats to pretty Catholic girls from the nearby high school, to the friendly florist from across the street, to other people that I don’t remember quite so well.

I was a drug-running soda jerk. Last time I checked, the soda fountain was still there.

The people and the crimes portrayed in North of Grand are purely imaginary. Really bad things do happen in Des Moines, of course, but none that I’ve witnessed.

A young guy did threaten to kill me and a friend when we were in high school, but we managed to talk him out of it. One night years later someone reached in our son’s bedroom window at our little house on Iola Avenue and took off with a diaper bag, but that’s the closest thing to crime that came our way.

All things considered, Des Moines is a pretty good place to live or to be from. We’ve been away for years now, but it never seems that long ago.

A man turns up dead in a bicycle storage locker on a muggy August morning and Detective Red Shaw takes the heat. 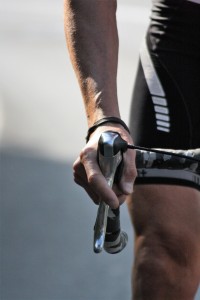 Shaw has just outsmarted a murderous sociopath who almost killed him. Now he has another homicide to investigate—while he’s hobbled by a sore knee, distracted by a steamy new romance, and dodging accusations of coercing a confession in an old case.

Shaw and his partner probe the sometimes toxic, competitive world of amateur bicycle racing, where they find a web of cryptic social media messaging, stolen property, drug trafficking, and murder.

Get it now on Amazon!

If you somehow missed the first Red Shaw novel, called a “compelling, gut-wrenching thriller” by one reviewer, you can get that on Amazon, too: BLOOD SOLUTIONS.

Use your detective skills to identify the sculptor who sculpted the sculpture in the photo, and you get Blood Solutions, my “compelling, gut-wrenching” thriller free!

Just email your answer to me at this address and tell me how you like to read your ebooks (Kindle, Nook, etc.).

You have until the end of the day Sunday, March 6, to ID the sculptor and claim your free ebook.