Imagine being plucked from your day-to-day routine and plunked down in a jury box for three weeks.

Imagine what you see and hear as prosecutors try to prove beyond a reasonable doubt that the defendant murdered, disemboweled and dismembered the mother of his child, stuffed her headless, limbless torso into a suitcase, and dropped it in a dumpster in another state.

Suppose you can discuss this with no one, not even your fellow jurors, until the appointed time comes to deliberate.

That time came for me yesterday. The trial ended a few hours ago. The jury on which I served found the defendant guilty of first-degree murder and three other charges.

I leave the details to your imagination and the news media because for now I don’t have the words to describe the experience beyond this:

Whatever discomfort the jury felt, it was nothing compared to the horror that many others in that courtroom have been through and will remember with such pain and sorrow for the rest of their lives.

If I write about the experience again, in this space or elsewhere, it is simply my way of coping. Some questions are too difficult to discuss in person other than with my closest family and friends.

Denver Post columnist Mario Nicolais writes here that officials made the right call by not pressing charges against Colorado State Rep. Lori Saine, who was caught carrying a concealed weapon through airport security.

It was “an honest mistake,” writes Nicolais, who says he carries, too, and easily forgets that he’s doing so. He says the lawmaker shouldn’t have to defend herself in court for an honest, understandable episode of carelessness. Presumably he is now absolved, too, in advance.

Mistakes like Saine’s, however, aren’t much different from those that lead to the tragic deaths of children who find guns that parents or others forget to secure properly and safely.

Saine likely beat herself up inwardly, Nicolais said. Maybe even with expletives! He guesses that she asked herself within a second of being caught how she could be so careless.

Yes, how horrible that imaginary inner dialogue must have been for her.

An individual who is prone to forgetting he or she is carrying a deadly weapon should not be permitted to carry a deadly weapon, concealed or otherwise.

Still, forgetful Coloradans Saine and Nicolais could be carrying in any state soon if proponents of concealed carry reciprocity get their way.

A friend of mine, a fellow Navy veteran, shared this black-and-blue image the other day from a Facebook page called Police Lives Matter.

Does that mean I’m afraid to share those four words? Does it mean I don’t believe police lives matter?

Not at all. I might actually share something akin to “I support law enforcement” under certain conditions:

“I support law enforcement” is so vague as to be meaningless unless you recognize it as shorthand for “the cops are always right.” If that’s not what you mean, you have to clarify and qualify before I will share it.

I support law enforcement by paying my taxes.

I support the enforcement of just laws by honorable, competent public servants.

I respect individual law enforcement officers who treat me and other people with respect.

So Des Moines started getting cool a few short years after the Smiths moved to the starkly less cool Cedar Rapids? Sheer coincidence.

For what it’s worth, I thought my home town was always pretty cool, if not as slick as those snooty Twin Cities we supposedly looked up to back in the day.

Politico’s new story of how Des Moines went from “totally dysfunctional” to cool is an interesting read anyway. I haven’t thought about scooping the loop in years and had no idea that it was considered “a menace to society,” as columnist Rekha Basu says in the story.

I thought the menace was Roosevelt H.S. guys wanting to beat me up at the bus stop, or the guy on an inner-city street corner who wanted to kill me and a friend on our way to Dowling one morning. (We talked him out of it and walked away.) 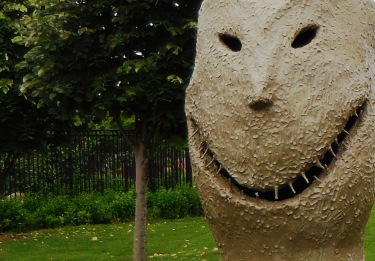 Des Moines was also cool enough that it inspired me to write what has been called “a compelling, gut-wrenching thriller,” which takes place on those formerly mean, now-cool streets.

In one of my favorite parts of the story, Detective Red Shaw meets another key character in a sculpture park that wasn’t even there when we last lived in Des Moines.

Another takes place where caucus-covering reporters used to stay, and I suppose some still do:

“The Savery Hotel had been the Harrises’ favorite hangout since the days when its bar was crowded with reporters from across the country who were covering the Iowa caucuses. The newer Coda and BOS were OK, but Maura missed the old atmosphere.”

Sometimes I miss it a little, too, and it’s fun to visit family and friends in Iowa when we get the chance. Even Cedar Rapids is getting pretty cool, a trend that actually started before the Smiths went west.

Since I published my first crime novel a few months ago, the most common question, and usually the first one that people ask me when they hear about it, is “How long did that take you?”

My standard answer is “Too long.”

For the record, such as it is, I wrote the first several drafts on a manual typewriter. I’ll let you guess how far back in the day that might have been.

The next few drafts were in the digital age and stored on diskettes. (Remember diskettes, anyone?) I printed query letters on a dot matrix printer and mailed them out with a synopsis and some sample chapters.

An editor from one of the big traditional publishers took the bait and had me send the manuscript, which I did. An agent was interested at one point, too, but backed off when he learned about the rejections I’d already gotten by the time he contacted me. The editor who read the manuscript was gentle in declining, complimenting me on character development, but the plot of that version of the story was lacking a bit in suspense.

Fast forward to 2014, by which time the printed copies that I kept had sat on a shelf in my home office for far too long. By then I’d self-published a memoir, authored or co-authored two books for hire, and edited and published another book written by Jim McLaughlin, motivator and trainer par excellence. (More about some of that on Books.)

I came across my manuscript in the basement one day and realized why I had kept it through more moves than I care to remember. Without realizing it, I’d been waiting to be a better writer to make a better story.

Over the next few months, my wife and I retyped the original (Thanks once more, Sue!) and I rewrote and edited, rewrote and edited, added some new characters and a good bit more suspense, and rewrote and edited some more. Cousin Becky Swift helped me with some fact checking since I’d moved long ago from Des Moines, where most of the story takes place. I did an online tour of the Des Moines Register, which had moved in the intervening years but still had an integral role in the plot, and I visited some of my old haunts via Google and Bing to see how they’d changed. I saw them anew through the eyes of my characters, who said and did new and unexpected things.

One day it was ready.

That’s how long it took.

What would your search history say about you?

You’re a good reporter, but I think you’re also human. Those don’t have to be mutually exclusive.

Until the situation presented itself and he was talking to a character from The Des Moines Register, I did not know that my fictional cop — Detective Edward Shaw (“Red” to his close friends) — took such a dim view of newspaper reporters.

That attitude certainly doesn’t come from yours truly, B.A. Journalism, University of Iowa. I was, after all, a reporter and copy editor for The Daily Iowan, and a reporter for The Ottumwa Courier and The Clinton Herald, where I occasionally covered the police and courthouse beats. Mrs. Smith also was a reporter and editor in Cedar Rapids after I crossed to the dark side, into public relations and beyond.

Shaw’s comment doesn’t reflect my own opinion of reporters, at least not the many good ones I’ve known and respected. He must have had some bad interactions with the media before I created him from nothing.

I’m curious as hell to know what he’ll say in the next book.